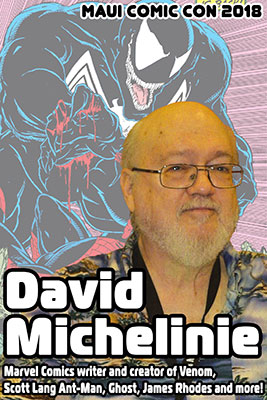 David Michelinie has been a professional writer for over 40 years. He has written more than 600 comic book stories, in which he created several characters (Venom, James RhodeyRhodes, Scott Lang, Ghost) which have been featured in major motion pictures. His comics work has spanned genres from westerns to war to horror to super hero. In addition to his comics work, David has published two novels, has placed short stories in anthologies (WEREWOLVES: DEAD MOON RISING) and periodicals (Spider-Man Magazine), and has written scripts for the Nicktoons animated series, ͞Iron Man Armored Adventures. His comic book biography of Mother Teresa won the Catholic Book Award for Best Children͛s Book, and his recent prose effort, Lord Pembertons Adjustment Service, won the 2017 Pulp Factory Award for Best Short Story. 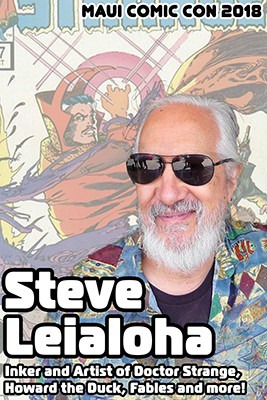 Steve Leialoha has been drawing and inking for Marvel, DC and many others. Highlights include Vertigo’s Fables, Jack of Fables, Nevada, Petrefax, the Dreaming, Sandman, and Dead Boy Detectives.

Since the 70’s he has been an inker on Warlock, Howard the Duck, Daredevil, GI Joe (the Silent issue), Superman, Batman, Captain America, Captain Marvel, Ms Marvel, the Avengers, Secret Wars II, the Fantastic Four, and the original Star Wars adaptation.

He has also drawn the Justice League, Dr Strange, Iron Man (the Hawaiian Adventure!), the X-Men, New Mutants, the Hulk, She-Hulk, Spider-Man, Spider-Woman, the Hitchhiker’s Guide to the Galaxy and Star Trek! 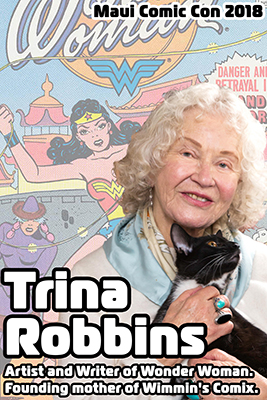 Trina Robbins has been drawing and writing comics since 1966, when she drew comics for the East Village Other, New York’s iconic underground newspaper, while at the same time designing and selling clothes from her Lower East Side boutique, Broccoli. In 1970, she produced the very first all-woman comic book, “It Ain’t me, Babe.” In 1972 she was one of the founding mothers of “Wimmin’s Comix,” the longest-lasting women’s anthology comic book. (1972 – 1992)

In the mid-1980s, tired of hearing publishers and editors say that girls don’t read comics and that women had never drawn comics, she co-wrote (with catherine yronwood) “Women and the Comics,” the first of what would become a series of histories of women cartoonists. She has been responsible for rediscovering previously forgotten early women cartoonists like Nell Brinkley, Tarpe Mills, Barbara Hall, and Lily Renee.

In 1986 she became the first woman to draw a Wonder Woman comic book. 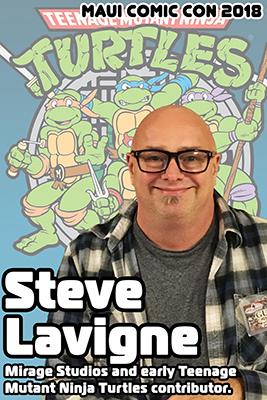 Steve Lavigne was the very first artist employee hired by Kevin Eastman & Peter Laird (co-creators of TMNT/Mirage Studios) back in 1985.He and Kevin Eastman attended high school together and it has been revealed in various interviews with Eastman, that Michelangelo’s personality is actually based on Steve.

Camp started his animation career as a designer for animated series such as ThunderCats, Silverhawks, TigerSharks, and several other series produced by Rankin/Bass. He then worked as a designer on The Real Ghostbusters for DiC, and later as a storyboard artist on Tiny Toon Adventures for Warner Bros. Television.

Camp was a co-founder of and director for Spümcø, the animation studio that created The Ren & Stimpy Show. He played a major role in the studio’s creative force until September 21, 1992, when he left to work for Games Productions (a.k.a. Games Animation), the animation studio Nickelodeon initially created to continue work on the The Ren and Stimpy show series after Spümcø had been fired. At Games, Camp was promoted to creative director of The Ren and Stimpy show and supervised work on the episodes made. After Ren and Stimpy had ended in 1995, Camp and former Ren and Stimpy writer Jim Gomez began developing a new series for Nickelodeon titled Kid Komet and Galaxy Gal, which was never picked up for a full series.

In the 2000s, Camp worked as a storyboard artist on animated feature films such as Looney Tunes: Back in Action and Ice Age: The Meltdown.

In the 1980s, Camp worked at Marvel Comics as an illustrator on many comic titles including G.I. Joe, Crazy Magazine, Bizarre Adventures, Savage Tales, Conan the Barbarian, and the ‘Nam.

Camp currently teaches at the School of Visual Arts. 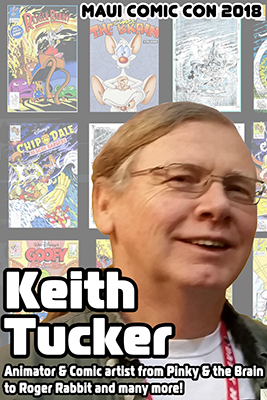